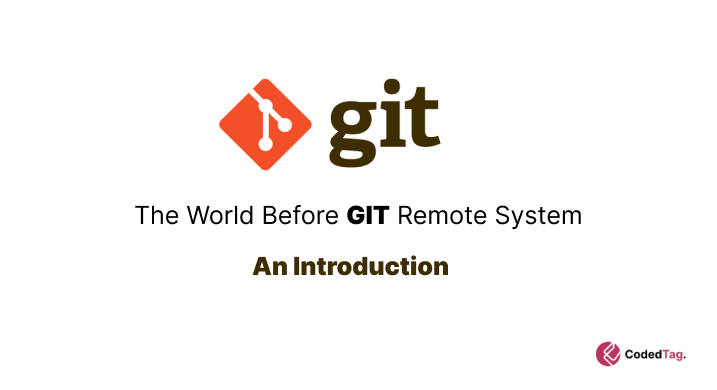 What is Git remote? The GIT stands for global information tracker. Which is a version (-v) control system (VCS) that helps developers to share and download their repositories through some commands.

Anyway, the git allows you to use some command lines to manage and track your project from the online repository to the local branch.

In the next section, I am going to focus on the concept of git and the history challenge.

What is Git remote? Understanding the Git Concept

As I mentioned, the GIT mean a global information tracker. Which can track and manage the information during the stack by something called a tree and that can work according to the command line interface or using the GIT GUI app.

And that can be done according to the remote system. Such as GitHub, Bitbucket and so many others.

In this tutorial, you will take an overview of the GIT history and why did they design it.

The History Overview: The World Before GIT System

Before git, there was the Linux Kernel. It was designed by the commercial BitKeeper VCS. The BitKeeper is a software created to distribute the revision of computer source code.

Anyway, in this time this establishment was providing a free software version control systems which was CVS and RCS.

But Larry McVoy withdrawn the free use of the BitKeeper product. The one of known reasons that he said, Andrew Tridgell was designed another control system called SourcePuller and that by using the reverse engineering depending on the BitKeeper Protocol.

In this time, there was someone called Linus Torvalds who is a software engineer and the lead developer for the Linux Kernel.

Linus was thinking on the alternative to avoid the commercial solution. So he was searching for the all free software but he found the same restriction.

There was no specifications like the BitKeeper as a free solution.

From here, the GIT was born. In the next paragraphs I will focus in the history of git.

The Git was released in April 2005 by Linus Torvalds, It was designed as a result of companies exploitation for the free distribution systems.

The GIT was placed in a self hosting, It started the first merge of the GIT branches in half of April. However, the second kernel 2.6.12 was released in December 2005.

In this article, you learned about the git remote system and how was it working on the past with BitKeeper company. You can download the git on your operating system from here.

Thank you for reading, stay tuned for my next articles.

Did you find this article helpful?

Sorry about that. How can we improve it ?

Thank you for helping us to improve.